For a small, family-owned business, DeBourgh Manufacturing has truly come far and grown since its early beginnings. From the first-generation Berg brothers to the third and fourth generations of Bergs who run the company now, each member has always worked hard to maintain the integrity of the business, keeping the priorities of the company in line with those of their ancestors. 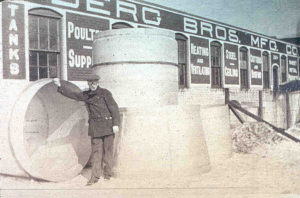 erman Berg was the great-grandfather to Daniel, Patrick, and Rachael Berg, the fourth generation currently working at DeBourgh Manufacturing Company. In August 1909, Herman and his three brothers went into business together, starting in the basement of a hardware store in Minneapolis, Minnesota, under the name Selby Lake Sheet Metal.

They began by making stove pipes, gutters, downspouts, flashings, grit bins, and water tanks; taking steel and fabricating it into whatever the customer needed. The Berg bros and their company were often called by their slang name, “Steel Mongers.” Which was a pretty fitting name for a company that would stay in the steel business forevermore. After a few years, their company grew and their products began to gain a reputation for high quality. This newfound notoriety prompted the company to change their name to Berg Brothers.

In 1930, the Berg Brothers attempted to sell the company but were never actually paid for the business so they reabsorbed operations. Since they could no longer work under the Berg Brothers name, they adopted an old family surname and officially became “DeBourgh.” Fun fact: The Bergs have a lot of extended family who still use this name, albeit with a different pronunciation.

Before There Were Lockers 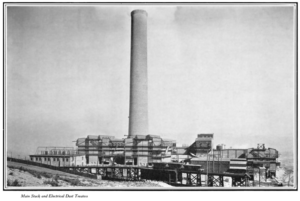 DeBourgh wasn’t always all about lockers, and over the years they’ve had a production versatility that extended to all things metal. In the 1920s, for perhaps the first time in history, there arose an interest in employee safety, especially those who working with heavy machinery. To address this, our company made machine guards out of expanded metal and angle iron, which would later become the base material used to build DeBourgh lockers.

Through the years, the company has done many cool things, accomplished feats of engineering that were groundbreaking at the time. DeBourgh took on the challenge of making the largest smokestack ring on the tallest man-made structure of the time, west of the Mississippi. Creating an eighth-inch solid copper collar, 22 feet in diameter, which was installed on top of the Anaconda Copper Mine smokestack in Montana. 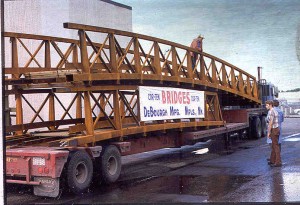 DeBourgh was one of the first companies to create gasoline tanks for airplanes that enabled aviators to fly upside down while performing aerobatic shows.

The company was also highly involved in defense work, which played a significant role all around the country in the 1930s and 1940s during World War II. We built tanks, parts for B-24 bombers, struts for gliders, and rocking rollers for the Bailey Bridges. All of which were used heavily by the military.

During the 1970s to 1980s, a big faction of our products we produced was the Town and Country Bridge, constructed of Cor-ten, a self-weathering steel. These pedestrian bridges were shipped all over the country and were purchased by golf courses, parks, municipalities, and recreation centers.

As different generations joined the company operations, each highlighted a new direction. 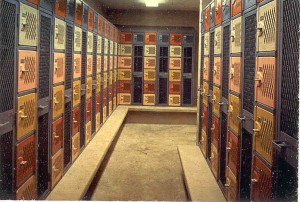 Bob Berg, of the second generation, started asserting himself in the company in the late 1940s and ’50s. Bob set up an entire network of distributors for the DeBourgh “All American Lockers.”

In 1931, DeBourgh built a large series of lockers for the University of Minnesota’s hockey team, whose athletes needed a lot of ventilation to dry out their equipment. The lockers worked so well that the team members remembered our company, and when they went on to become coaches and athletic directors, they came back to DeBourgh order more of the same great quality products for their teams. That design became the All-American line.

Around the early 1960s, Bob Berg redesigned a package of lockers with new sizes and 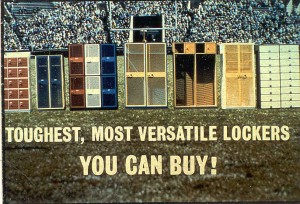 options. He expanded the line as it caught on with customers and patented specific locker latching mechanisms. At that time, we were still making other products, such as road graders, soil compactors, dredging machines, material handling equipment, and a slew of other metal fabricated products. Even though the company was manufacturing other merchandise, ultimately, they chose to focus their attentions on their high-end locker line products.

In fact, for DeBourgh’s 100-year anniversary, DeBourgh held the celebration in Minnesota and found some of those original lockers first made for the University of Minnesota in 1931! The lockers had been transferred to a local YMCA and still bore the original number plates. Even more shocking, the locker had been re-painted a few times, but no parts had been replaced. Many of those initial lockers are still in use today, more than 85 years later!

“A huge point of pride for us is the way we do business and that we have always built and always will build a product that we expect to last, no matter what the economy is doing. We keep the customers in mind and what they need.” 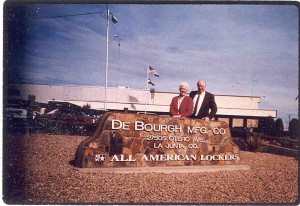 Business had been great; the company was operating out of a suburb in Minneapolis, Minnesota, spreading across three buildings with about a quarter of a million square feet of space. Then, in the 1980s, there was a huge steel crash that impacted the industry. Since most of our locker products are exclusively made of steel, this hit DeBourgh hard. The Company was forced to liquidate the fabrication division, stopping production of many of their products.

At this point, the DeBourgh was looking at closing because it could not sustain the space. But the third generation, Bob Berg’s children, Janet, Rob, and Steve, decided that instead of letting the company fold, they would stay true to their ancestor’s wishes: To keep the business in the family. As Grandpa Bob Berg would say, “If it must go back into someone’s garage, so be it, but we keep this business in the family.”

The Berg siblings looked around at where they could relocate the company, considering seven different states and 13 potential locations. They ultimately decided on La Junta, Colorado, a desert town in the southern part of the state, where they moved in 1990. Unfortunately, on account of not having enough people willing to relocate, they weren’t able to take the remaining part of the business: the bridge department, with them.

Soon after moving into the new location, a devastating blizzard struck the area, and caved in the roof to the new factory, destroying the Berg’s stock of steel and requiring them to perform extensive maintenance on a lot of their equipment. 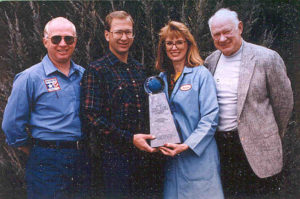 “We will be forever grateful to the city of La Junta. Between the dedication of the people and the community of La Junta, we were able to rally together and stay in business through it all. It continues to mean a lot to us that we get to work with and around such a great community. Because of that test in fortitude, in 1992 our company was recognized by “The Best Year Ever,” which presented us with the National Blue Chip Enterprise Initiative Award.”

DeBourgh has been in La Junta, Colorado ever since, focusing on lockers and storage systems and expanding those lines to many different markets, including K-12 schools, athletic departments, military, and first responder units. The company has developed a lot of specialty products, including a stars and stripes locker for school bands, with musical note symbols knocked into the doors and walls. By now, if there’s a compartment you use for storage and lock, DeBourgh Manufacturing probably makes a comparable product!

*As told by Patrick Berg 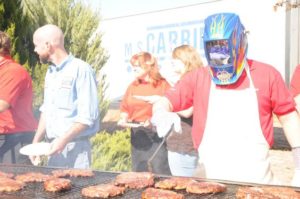 We stand today on the will of the family that started this company, and the wish to keep that alive, not just for the ability to be a part of their legacy, but also for the people who work for our company. While every company claims it, we truly do treat and consider our employees like family.

We throw monthly company lunches, where we discuss the state of DeBourgh. We are always open and honest with our employees and truly do love it when we get feedback. We have a strong group of people who play an integral part in the company. They trust the company and we, in turn, trust them. We have people who have stayed with our company since the move to Colorado, having spent 30 years or more with DeBourgh.

For more than 100 years, our family has brought innovation and quality together to form the most reliable and durable lockers the market has to offer. There was a time when we had three generations of Bergs all working together under one roof. Now, two generations work side-by-side to keep our values and standards at the forefront of our mission to provide quality lockers.

Our history has remained a powerful inspiration for every generation that has worked to help continue the legacy that is DeBourgh. It’s been quite a journey; here’s to many more years!