In the locker world, the way that a locker is constructed places it into a unique category. There are two types of lockers with major differences, so here we will discuss formed lockers and fully-framed lockers and what each approach gives you in terms of stability and flexibility.

o build framed lockers, we use a framing material called angle iron, which is often found in construction environments. This 1” by 1”, 8th-inch thick material piece of angle iron steel looks like a little teepee when it is laid flat on the ground. Beginning with long pieces of this material, we notch certain spots and then bend the metal together to look like a picture frame. 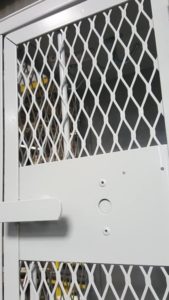 This strong, sturdy frame, placed on either the doors or sides, provides reliable bodywork so that we can use highly ventilated material along the locker. Because removing material weakens the overall structure, you need a much sturdier frame to accomplish greater ventilation.

Then when even a well-ventilated locker is moved around, bumped into, or hit with a bat, as we enjoyed demonstrating on our website, the entire locker can bounce back and keep its structure and functionality.

The most airflow you can get is by using expanded metal or mesh. This material is reminiscent of a chain-link fence, but much smaller, and is made from flat steel. Tightly knit mesh keeps the air flow without allowing the locker’s structure to be compromised. A strong frame and an appropriate amount of welds (DeBourgh does a standard 6 inch on center) — that’s what keeps people from being able to kick in the door/wall.

Ventilation is essential in an enclosed space where dirty gym clothes or athletic equipment will be stashed. Air flow keeps humidity low, the air relatively fresh, and prevents sweaty equipment from staying damp. 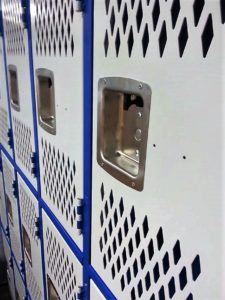 
For the formed locker, a flat piece of sheet steel is taken and bent to form channels and begins to shape the exterior of the locker. This careful process gives it its body and rigidity. There isn’t a frame for this locker, just a bedsheet of metal, in which we stamp carefully placed ventilation holes.

However, every time you remove material, it makes the entire locker a little weaker, so it’s important to not remove too much steel. Formed lockers are very sleek, designed for hallways and places where ventilation isn’t as critical.

These lockers don’t stand up as well to being hit with a bat and might react similarly to the hood of a car under the same treatment.

Think that kind of treatment is unlikely? Think about how often members of an away team might go into the other team’s locker room after a frustrating loss and uses their helmets to show their displeasure. Hint: It happens a lot.

Both of these types of welded lockers offer different benefits. When ventilation or security are your top concerns, fully-framed lockers are the best choice, as the structure itself is more sturdy and allows for better air flow. It also doesn’t dent as easily, and if it does, it can be fixed, while formed lockers aren’t so lucky. Formed lockers work best in hallways where you don’t anticipate a lot of violence and when you’re wanting that sleeker look.