Over the course of locker latching history, there have been three main types of latches used in hallways. Ease of use, maintenance requirements, safety, and, of course, security have all been considered when improving on these latches, and often meant a change in how the locker itself is constructed. 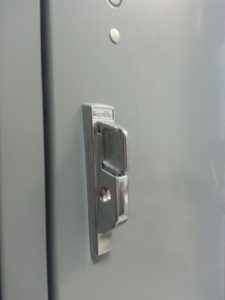 This multiple point latch has a protruding handle that must be pinched and lifted to release several points on the door. A design that has been around since the 40s and 50s, you may recognize it from the school hallways of classic movies, but as a low-quality latch, it is rarely used today.

Because of its many moving parts and small pieces, this latch was prone to shifting, warping, and breakage, and needed a lot of maintenance over the course of a year. Even more concerning, however, was the danger it presented by protruding out into the hallway. Students scraped themselves on the handles, were hurt if they got pushed or jostled into the locker or got caught on the latch. By jutting out, the latches also tempted kids to kick them or hang things from them, further damaging the locker and compromising its security.

Locker craftsmen put their heads together and determined that there had to be a better way. So for safety’s sake, this type of latch went out of use. Nowadays, there aren’t really any benefits to using this lock, given the improvements that the next latch offered.

The gravity lift latch (or Sentry II) is also a multiple point latch that works much the same as the protruding finger lift latch and attaches to the same mechanism. But instead of parts sticking out to catch unaware users, the mechanism was set into a small recess, unobtrusive and much safer.

The sleeker look solved the problem of the protruding latch, but there was still the issue of the constant maintenance that the mechanism required. Master locker-smiths again pondered what more they could do to improve the latches, wondering if it was possible to create a secure lock that had no moving parts.

The value of the multiple point latch is that it offers security at several locations. So for the single point latch (or Sentry III) the goal was for it to be strong enough that even if it only latched at one point, it would still not break. This latch is a single point, non-moving latch without any moving parts, so it is very low maintenance and typically lasts a long time. A strong hasp sits within the recessed cup and can be used with a padlock or combination lock.

The point of a latch, of course, is to keep the locker secure. So you can either build security around how many points it latches, or how strong the key latch is. Since the single point latch has only one point of contact in comparison to the Gravity latch’s three, that one latch must be made as strong and secure as the multiple points combined.

There is really no benefit to using the outdated protruding finger lift latch anymore, as it is hard to use and doesn’t work very well. This keeps it from being ADA compliant, while both the gravity lift latch and the single point latch meet ADA standards.

We recommend #2: the Gravity Lift Latch if… 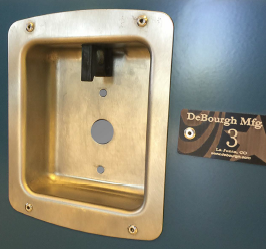 latches allow the doors to close completely without a lock and could work in settings like elementary or middle schools where administrators prefer not to assign combinations or locks.

● …security is of utmost importance to you. Multi-point locks do offer a little better security and might be the best choice for ultimate locker protection.

● …you need your lockers to be as ventilated as possible for visibility or air flow and want the very minimum coverage, preferring to use a multiple point latch for added security.

● …you are concerned that kids may have trouble with the padlocks you’ll be using. The gravity lift latch is a “slammable,” self-closing one that allows kids to easily close and lock the lockers, hands-free. (see picture) 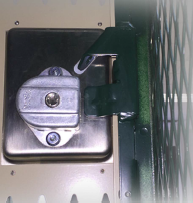 Because it was initially developed to decrease maintenance, for hallway locker installations where minimal maintenance is a primary focus, the single point latch is overall the best option. It is still very secure, and there is no way to interfere with the latch to prevent it from working. If you’re concerned with kids’ 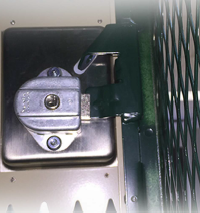 ability to slam or easily close the door, there are different types of built-in locks that work alongside the single point latch to make it easier to close the door.

To make up for any reduction in security, locker doors with this latch will be strengthened in other ways like a reinforced back stiffener. And since a more rigid doors make less noise, you can also reduce the racket in your hallways by choosing this latch.

Choosing a latch is deciding on a trade-off between security and maintenance. The more latching points there are the more secure it is. But if you have a strong and secure door then a single point should be enough.

It’s important to remember that there are ways to make both latching mechanisms comparably secure and that ventilation and ease of use can be evened out in other ways. There is no real difference in cost, and both versions can use padlocks and built-in locks. The problem with the multiple point latch is the never-ending maintenance. So all things being equal, we generally recommend the single point latch for your hallway lockers.

Talk to the experts in residence at DeBourgh Manufacturing to determine which locks work best for your needs, and how to accommodate security and ease of use in a variety of other ways.